Men above eagle's head — represent all Soldiers, Marines, Sailors, and Airmen — they are center stage in a golden halo — most important position on logo. These Veterans "have our back;" they "share our foxhole;" they are our "wingmen;" they are "our protectors from harm."

​Eagle — a national symbol of strength, with outstretched wings, trying to reach up and over our Servicemen to protect them, as they have protected us. The wings do not complete the full circle as there is still much our country must do

Torch — common emblem of enlightenment and hope. The Class of 1972, US Naval Academy, 27th Company have made a commitment to not only share with the world that freedom is not free, but to show appreciation and provide encouragement to those Veterans returning home. We carry that torch!

Navy Jack (Stars and Stripes) — displayed in memory of those killed on September 11th, 2001 and those that made the "ultimate sacrifice" while fighting the war on terror 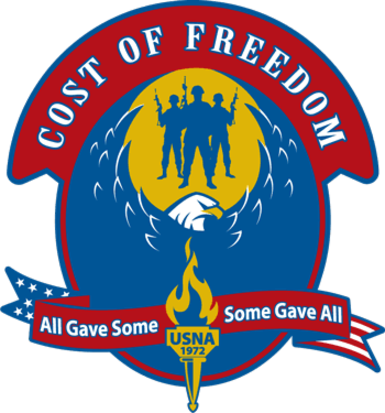 "All gave some. Some gave all." — a banner to all Servicemen and Servicewomen that honorably took part in the defense of our borders and the protection of our nation's greatest treasure — freedom; and a salute to those fallen Soldiers and Marines that gave the ultimate sacrifice.

USNA 1972 — those Cold War Warriors from the Class of 1972, United States Naval Academy that believe in "making a difference" by carrying and passing the torch forward to generations to come

Red, White, and Blue — the patriotic colors of our country, the United States of America; in which we pledge our allegiance and to which we are "proud to be an American" 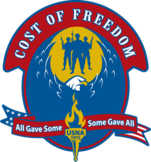